My first Grilled Dish was this Steak. Finally, cooked through to Medium Rare on third try. Restaurant shall remain nameless because they were nice folks with good reputation.

Was (not so) recently invited to a wedding in Puerto Vallarta. I say “not so” recent because the invites went out nearly eight months ago, so I couldn’t give the excuse “I have a Catering Gig”. For a forced vacation situation, it is lovely to be here in Mexico. Especially with Jamzilla going on in Los Angeles.  I ordered a Medium Rare grilled Steak on the first night here. It arrived raw, and I made the mistake of tasting it. My stomach is still paying the price for the faux pas.

Onto Grilling. Wherever in the world I travel, I try to make it a point to check out the local Grilling Scene. There is always something new to learn- a technique, secret ingredient or full recipe(s). If you stick with me, and I’ll show you that the world is indeed a small place when it comes to BBQ. The interesting thing is that Grilling is really big in Puerto Vallarta. Especially on the many great Beaches found around the town. I’ll let the story unfold through photos.

The first night, we took a walking tour around Zona Romantico, it is considered a progressive, trendy part of town. Filled with restaurants, bookstores and boutiques. We happened by a place Called Marisco’s (translated: Fishes). Unfortunately, the last place you want to eat is at an empty BBQ joint. There is no telling how many hours (or days) the food has sat around. So we had to keep moving. Plus, I had already had the raw steak fiasco, so wasn’t able to even taste a snack from the menu. 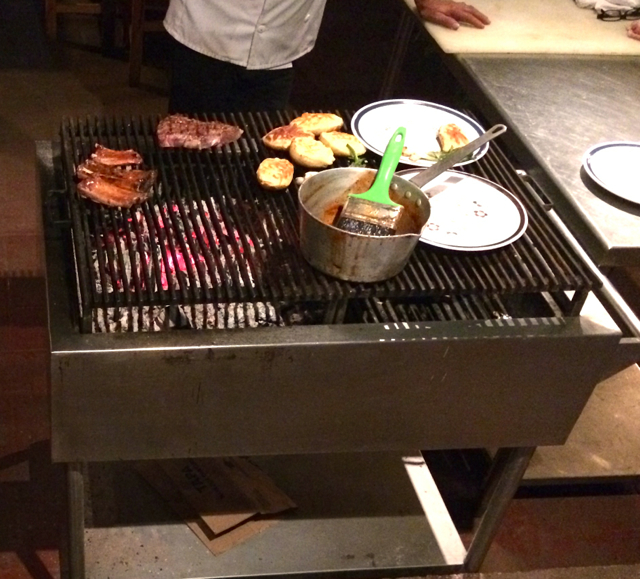 A nice looking Grill at a lonely restaurant. The food could be great, but no one likes to eat at slow BBQ Joint where you have to guess how old the food is.

A guy behind the Grill was “barking” at people on the street and invited me to take a photo. Here you see Steak, Potatoes and Huesos (Ribs) being cooked on Mesquite. Something looked a bit off about the food anyway. Couldn’t quite put my finger on it yet.

The next day, I ran into a crew doing a BBQ Catering on the beach at my hotel Casamagna Marriott Puerto Vallarta Resort and Spa. First, I met Marcelito, who was firing up the Grill. In an interesting twist, he used dry Sterno Powder as an accelerant on the Mesquite Grill. I am intrigued and will look into experimenting with it sometime.

Later I met Chef Octavio, who ran the staff with great precision. They had their Salads set up and meats grilling like clockwork before their guests arrived at 7pm. I also met the hotel’s Catering Supervisor Carlos, who invited me to stay and cook with them. It was dinner time and I already had plans. But I hung around for a while, we took some pics and I gifted them with samples POWER Rub and the brand new HEROIC! No salt/No Sugar Blend. Guess they liked it. At least Octavio’s daughter did. She “Liked” my Catering and BBQ Rub pages on Facebook by the next morning. 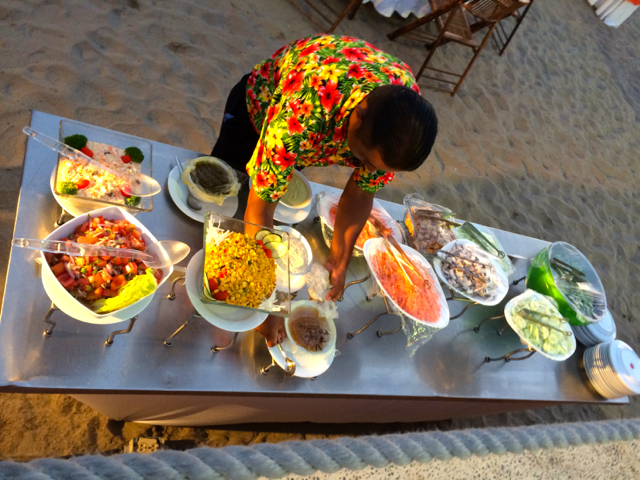 A nice variety of Sides and Salads were thoroughly enjoyed by BBQ Beach Catering guests.

Not sure if seeing a guest Chef made their guests hungrier or not, but by the time I left for dinner the Beach BBQ Catering spread was totally demolished. Carlos, Octavio and crew were beaming with satisfaction from another successful event. It’s a feeling I am somehow fortunate enough to have after every catering. Great Job Guys! In Part 2, Vamos a la Playa- or I will take you to the Beaches of Puerto Vallarta and we’ll see what’s cooking there. Until then, Eat and Be Well.

Here I am with Chef Octavio of the Casamagna Marriott Resort Catering Staff. The Chicken and two other meats didn’t have much time left on this Earth- thanks to hungry guests. Mucho Gusto.

Mick Brown is a Food Blogger/Purveyor based in Los Angeles, with over 30 years BBQ and Grilling experience. Aside from Catering, his passions are creating Easy Grilling Recipes and searching for the World’s Best Flavors. General Manager of Tastee BQ Grilling Co. and the new California Gold BBQ Rubs. He is also author of web serial blog “The Adventures of Tastee BQ.” Email- Mick@TasteeBQ.com

One thought on “BBQ Grilling in Puerto Vallarta, Mexico- Part I”