With the DIY Ceramic BBQ Pot Smoker inspired by Alton Brown for my blog “The Adventures of TasteeBQ” in 2013.

No worries… Every future column is not going to be about my appearance on the Food Network. In fact, this is the first time the results are being officially announced in this Blog: I WON!!! Please allow me to “Bask in Glory” for at least a couple of weeks… Overall, not much has changed. My phone and email boxes aren’t blowing up. I am still hearing from friends who saw the “Grill or Be Grilled” episode of Cutthroat Kitchen, where I won for Grill Master last week.

I actually got to meet Los Angeles Mayor Eric Garcetti at a Retirement Party for Charley Mimms in February 2015. I was only able to hint that he should look for me on Food Network TV sometime soon.

Until I get the official Cutthroat Kitchen Grill Master Instruction Manual, guess I will just have to “Wing it”. If the title broadens my muckity-muckdom (if that’s a word?), I suppose I should try to use it to make the world a better place-  at least to eat. You know, sitting down to good meal is something that I didn’t realize we take for granted. When you think about it, every time you eat is an opportunity to receive nourishment for both your body and spirit.

Greyson at home in his high chair.

This takes me to a recent opportunity that I was given to meet a very special youngster named Greyson. Even before they knew about the TV show, his parents had decided that they wanted me to do a Menu for their Thank You Picnic. It turns out that 6 month old Greyson was born with a rare medical condition called CCHS (Congenital Central Hypoventilation Syndrome). Also called “Ondine’s Curse”, it causes the body to “forget” to breathe while sleeping. He was recently released after spending the past 3 months at Children’s Hospital Los Angeles.

With Parents and Greyson being held by Auntie.

It was really nice to meet Greyson’s Family, Friends and some of the Hospital Staff who helped Greyson during his stay. The condition CCHS is considered an “orphan disease” and is the subject of an Oscar-Nominated short documentary called “Our Curse”. The CCHS Family Network estimates 1000 – 1200 diagnosed cases world-wide, however there is little funding support from government or the pharmaceutical industry. I want to personally Thank all of Greyson’s supporters who turned out for the Picnic and I hope they enjoyed the spread of Smoked Hotdogs, Burgers and Salad. It was a pleasure meeting all of you (especially my small group of Vegetarian and Gluten Free BBQ Friends).

As far as TV News, I had invited the local Press to attend a Food Tasting I hosted at Marconda’s Meats and Puritan Poultry (Farmer’s Market) on the same day of the original Cutthroat Kitchen airing. Despite the efforts of a Publicist, no Press attended that event or my Live Viewing Party later that night (with 50 of my closest Friends). I’d like the Thank everyone who came out to show their support. Most of my Cutthroat Kitchen Competitors (who didn’t win) got Press write-ups in their home town papers. So Los Angeles Media: It’s not too late to get the word out. Give me a call or drop me an email. Until next time, Eat and Be Well. 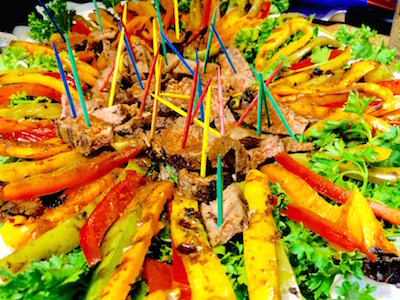 Chef Mick Brown is a Food Blogger/Purveyor based in Los Angeles, with over 30 years BBQ and Grilling experience. Aside from Catering, his passions are creating Easy Grilling Recipes and searching for the World’s Best Flavors. General Manager of Tastee BQ Grilling Co. and the new California Gold BBQ Rubs. He is also author of web serial blog “The Adventures of Tastee BQ.” He recently appeared on the Food Network for “Grill or Be Grilled” a special BBQ Edition of Cutthroat Kitchenwhere he won the Champion Title of Grill Master.  Email- Mick@TasteeBQ.com

Cutthroat Kitchen “Grill or Be Grilled”- Full Episode on Youtube

Grilled or Be Grilled- Alton’s After-Show